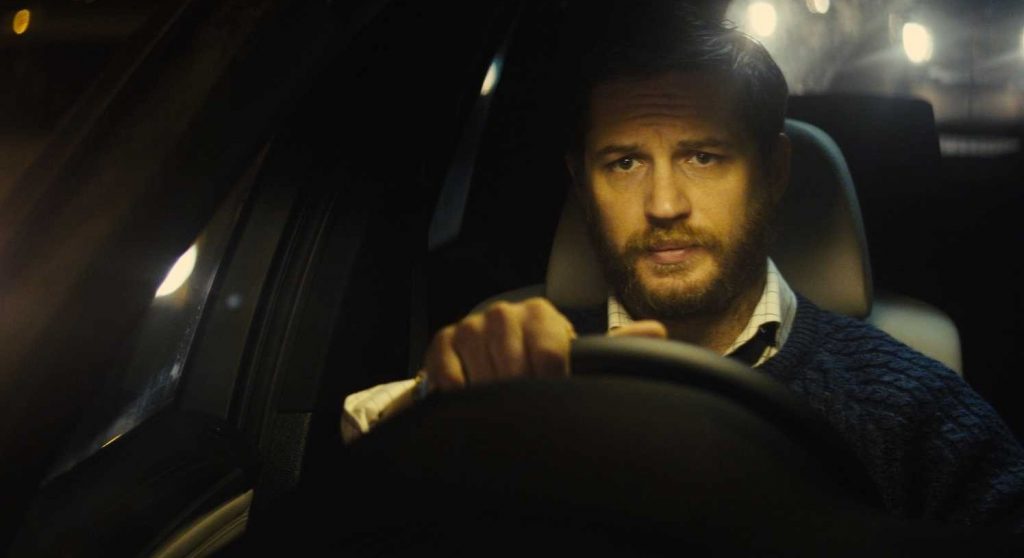 Locke is a 2013 psychological drama film written and directed by Steven Knight. Tom Hardy is the leading actor, and also the only character we see during the film. Other characters can only be heard during phone calls, and are voiced by Olivia Colman, Ruth Wilson, Andrew Scott, Ben Daniels, Tom Holland, and Bill Milner.

The film’s plot is very simple. Ivan Locke is successful in both his business and family life. After an unexpected call, Locke learns that he will soon have an illegitimate child with a woman he spent one night with. Because of a sense of responsibility and in order not to repeat the mistakes of his absent father, he immediately decides to go on the road to be present for his child’s birth, regardless of the consequences. This is why throughout the film the action takes place in a car and we only see one character. It may not sound very interesting on paper, but I haven’t experienced so much drama in a film in a long time. We meet other characters only through their voices.

Locke’s journey is accompanied by countless phone calls, primarily because he left his work as an architectural foreman without so much as a notice. Having been given an important assignment, the biggest he had ever worked on, Locke’s boss was understandably upset by his employee’s sudden absence, and consequently fired him. His job will now be performed by someone else, and most of the time the consequences of his absence are being addressed, sometimes even diminished. In addition, his family also wants some answers, as to why he is not at home when he promised to be. He was supposed to come watch the game, an event everyone was preparing for and eagerly awaiting. All the phone conversations reveal that Locke had a perfect life. A great job for which he was respected, and he was loved by his family. Everything changes during the trip. As he himself says, Locke is no longer the same person. The Locke who went on a trip had a family and a job, and the Locke who arrived at his destination has nothing left.

The drama in the film is maintained by the endless phone calls. Solving all of life’s problems, everything you can imagine, while driving in the gloomy and dark atmosphere of the night. All this keeps the anticipation high for a new situation, a new awkward call, and waiting to see whether Locke will arrive on his destination at all.

In my opinion, Tom Hardy has always been a good actor, but I’ve never been thrilled with his performance until now. After watching this film, my perception of him as an actor completely changed. His fantastic performance revealed a whole new dimension to his acting abilities. He is the only character we see throughout the film, yet viewers are provided with a whole range of emotions. His voice, his facial expressions, his psychological state that changes from moment to moment depending on the calls he’s having. The emotional state he was in before, during, and after every call. As his whole life crumbles, we see the inner suffering of the character, yet his facial expressions tell us that Locke is trying to stay sober and poised. But how can you be sober, professional and sensible, all at the same time as you are falling apart from the inside?

Other characters, as I mentioned, we get to know through difficult phone conversations. Although we never see them, they are very much present. In this film, through their voice, the importance of voice in acting is maximized as there is only the voice; its tone, the color of emotion expressed through it, characters materialize using it. Viewers can very well imagine what’s happening on the other side of the headset. The calls present the viewer with all the consequences of Locke’s decision and how they affected the people closest to him.

Locke goes to the hospital where his illegitimate child will soon be born. Locke cheated on his wife only once, with a person with whom he does not want to have a further relationship, but he feels a great responsibility towards the child. Here we come to the moral question. Locke loves his wife, he loves his family, his job, and all this will disappear because Locke feels he has to be present when his child is born. Some might ask, “Is it worth it?” He doesn’t feel anything toward the other woman, we even learn from a conversation that the birth of their child was his decision. Is it worth putting his personal achievements, both private and professional, all at stake for one mistake? His feelings of remorse and love seem real, and in spite of his deception, Locke is not portrayed as an egotistical idiot who loves no one but himself. He is but a person who at one point succumbed to temptation and is genuinely remorseful for it. In the end it turns out that his decision to attend the birth of his child is morally good, but many might wonder, was it is worth it? Couldn’t it have been done differently somehow?

But there is no other option. The viewer is constantly made aware that the protagonist’s decision will gradually ruin his life and that there is no other path to take. Every call and every sound of the phone will cause stress to the viewer because it is clear that it cannot and will not get better. With every mile, Locke is getting closer to the end of the life he knew.

The end of the film is also the end of the journey. We do not know the fate of Locke after he stops the car. That open ending makes it even more difficult to find a positive moment in the film. Only the desperate need for resolution remains.

The movie is definitely one of the most emotionally taxing car rides you’ll ever experience, and it will take a while before you can get it off your mind.