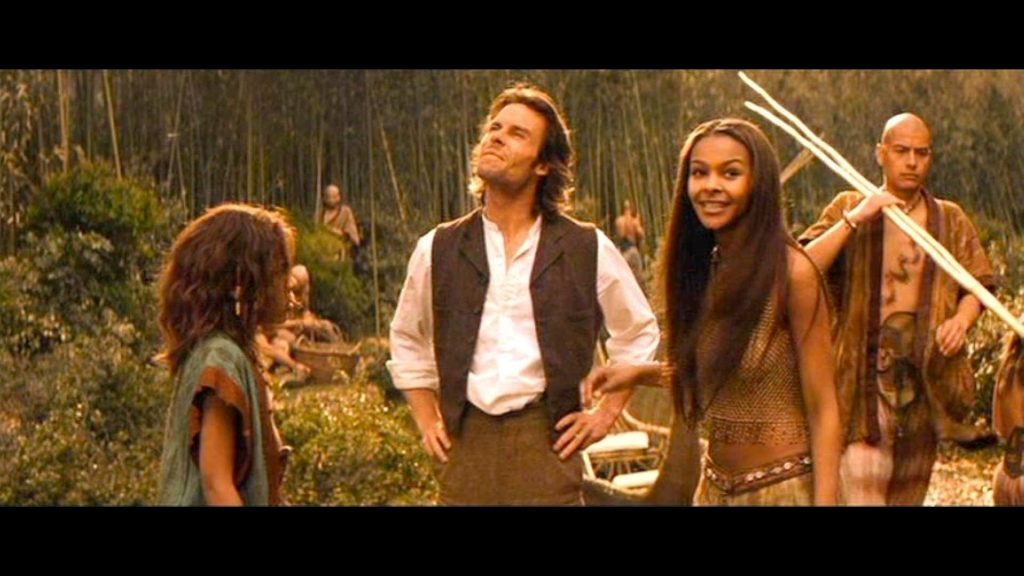 The Time Machine is a 2002 science fiction action-adventure film, not to be confused with the 1960 film of the same name. Both films are based on the 1895 novel of the same name written by H. G. Wells. Simon Wells, the great-grandson of the novel’s author, directed the 2002 film. John Logan wrote the film’s screenplay, and Arnold Leibovit acted as executive producer.

The film stars Guy Pearce as Alexander Hartdegen, Mark Addy as David Philby, Phyllida Law as Mrs. Watchit, Sienna Guillory as Emma, Jeremy Irons as Über-Morlock, and Orlando Jones as Vox. The film was released to mixed critical reception. Even today, the film holds consistently mediocre ratings from critics and audience members. In spite of its reception, the film ended up being a financial success, and even received a nomination for Best Makeup at the Academy Awards in 2003.

The film begins in the year 1899, following Professor Alexander Hartdegen, a scientist who is teaching at Columbia University in New York. Alexander is passionate about his work but, unlike his friends, doesn’t have a head for business. He is also deeply in love with his fiancée Emma, and her sudden and violent death pushes Alexander to the brink of madness. He devotes his entire existence to constructing a time machine in order to travel back into the past and prevent Emma’s  early demise. Four years later, he finally completes the machine and travels back to that fateful night in 1899, only to find that whatever he does, a new problem arises, and Emma ultimately suffers the same fate.

Alexander then travels to the future, hoping that people living in the far future will have an answer for him. At first he arrives in 2030 and is dismayed by the answers he finds. Not only do these future-dwellers not know anything about time travel, but he finds out that his research was dismissed as folly, and he was presumed dead since 1903. He travels 7 years more into the future, only to witness the destruction of the Moon due to a failed mining operation. He escapes back to his time machine hurriedly, and in a series of unfortunate events, mistakenly travels even further in time. When he awakens, the year is 802,701. This distant future is where most of the film takes place.

Even though the Moon was destroyed, humanity has survived. Alexander meets the Eloi, a people who live a primitive, hunter-gatherer lifestyle. Luckily, some of them still know English, so he can communicate with them. Things take a turn for the insidious as Alexander goes to sleep and dreams of a voice calling for him; a dream that everyone seems to share. He learns that terrible creatures called Morlocks hunt the Eloi regularly, dragging them into their underground abodes. Alexander elects to help the Eloi with this problem, turning from a man of science into a man of action.

While the film’s plot is largely based on Wells’ novel, several changes were made that understandably left fans of the original work disappointed. For instance, Alexander’s motivation for making the time machine is entirely fabricated. Also, the origin of the Eloi and the Morlocks is hardly addressed in the film, and their behavior is quite different. This isn’t helped by the fact that the movie’s acting can feel dry. Several key characters are either missing from the film or make their first appearance in it, pouring more salt on the wounds of long-time diehard fans. And finally, the biggest change occurs at the very ending as Alexander’s original purpose, as well as his professional curiosity, are all but forgotten, having been displaced by a redemption arc.

Seeing as the most common complaints made about this movie is the liberties it takes with its script, it should come as no surprise that reviews for this movie are usually one of two extremes: either the lowest, or the highest scores are given to it, all because of the differing expectations viewers have going into the film. If you watch the movie with an open mind, or if you haven’t had the chance to read the text that serves as its foundation, chances are that you will enjoy it. At the end of the day, nothing about this movie sticks out as being outright terrible. Perhaps more important is that there are quite a few positives to it as well. Namely, a gorgeous soundtrack that features one of the best vocal performances to grace a blockbuster film, some fantastic visual effects, and truly breathtaking sets and filming locations. Many will also be happy to know that all the scientific and philosophical monologues and narrations haven’t made the cut from novel to film, leaving more room for visual storytelling.

I recommend watching this film for any viewers out there who are fans of sci-fi adventure films. Sure, it follows a certain blockbuster formula – a splash of action, a pinch of romance, a “big bad” that needs to be defeated – but that formula happens to work in its favor. It’s a fun watch, and if you’re anything like me, the nostalgic sound of its beautiful soundtrack will force you to watch this movie more than once in the years to come.