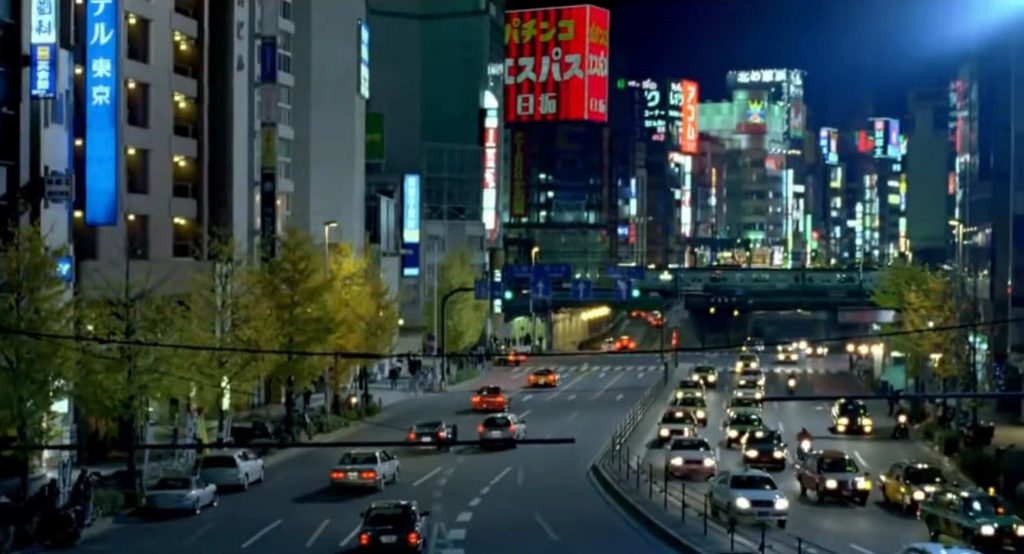 The Fast and the Furious: Tokyo Drift is an action film written by Chris Morgan and directed by Justin Lin. While it is part of the Fast & Furious franchise, it follows an entirely new cast of characters and focuses on the subgenre of motorsport called drifting. The film was released in 2006 and became a financial success, despite its mediocre critical reception.

The film follows Sean Boswell, a high school student who can’t help but get into heaps of trouble all the time. After a car race against a fellow student goes wrong, Sean is forced to go live with his distant father, an officer of the Navy stationed in Japan. Once there, Sean has to attend school and behave himself, but things don’t go according to this plan. Twinkie, one of Sean’s peers in his new high school, introduces Sean to the drift racing scene in Tokyo. Sean expertly gets into trouble once more as he races against Takashi, the best drift racer around, and a friend of the Yakuza. A spectator named Han offers Sean his car for the race, which Sean wrecks immediately, having had no knowledge of drifting before starting the race.

The pair form an unusual friendship as Sean works to repay Han the wrecked car, and Sean is subsequently trained by Han to become a better drifter. Things seem to be looking up, but Sean just can’t help himself and gets into trouble yet again. He asks Neela out on a date, which doesn’t sit well with Takashi. Since Takashi had basically forced Neela to date him, she has no qualms about walking away, but Takashi wasn’t ready to let her go off easy. Unbeknownst to Sean, Han and Takashi have history. The newly formed rivalry takes a violent turn before Sean and Takashi decide to settle their differences by drift racing, with the loser having to leave Tokyo forever.

Although the movie has had mostly negative or mediocre critical reception after release, it has since redeemed itself through audience scores and grown to become a classic entry in the Fast & Furious franchise. And yet, it isn’t quite like any other F&F flick. There is something to this movie that makes it stand out, and it has to do with the appeal of underground car racing. All of the previous and following mainline entries in the franchise focused on intense action scenes and notions of family. Tokyo Drift takes a step away from all that, and elects to focus its attention on car racing instead. There’s still plenty of action to go around but it is completely overshadowed by the gorgeous racing cinematography. Never before or after has there been a movie that shows an underground racing scene as vividly as Tokyo Drift does.

However, that isn’t to say that the movie is perfect. One of the biggest complaints I have read, and one I fully agree with, is that the casting of the protagonist leaves you wanting. Lucas Black simply cannot pass for a high school student, and his delivery is incredibly dry. This is somewhat remedied by the supporting cast, namely Sung Kang, who seems to be everyone’s favorite character. His nonchalance is something to be envied. Han has another purpose, however, which is to be the meeting point for the story’s protagonist and antagonist – having befriended one and aggravated the other. Neela shares this role, but the stakes are very different as she is never truly in danger.

Another common reason given for disliking the film has to do with its plot. It has a slow start, stealing precious screen time from the beautiful shooting locations in Tokyo. And while this is true, one has to consider that the movie’s location needed some setting up. After all, this is the first movie in the series to take place outside of the States, and even more importantly, it features a fresh cast. It may be slow to start, but I feel that this is a necessary evil in order to establish everyone’s character and motivations.

Naturally, if you were to dissect the plot as meticulously as film critics already have, you might find that it doesn’t have a lot of substance. It’s far from being outright terrible, but it is quite cheesy and fairly basic. It certainly isn’t a thinking-heavy film, either. Then again, it really doesn’t have to be. There are plenty of films out there that try to engage with the viewer or carry across some deep message. This one is perfectly fine being just pure fun. If you walk into it expecting to be entertained, you likely won’t be disappointed. That is why I can easily recommend watching Tokyo Drift if you’re looking for something to watch. Car fans will be particularly delighted to see some wonderfully choreographed racing, and with an age rating of PG-13, you can sit down to watch it with your family.